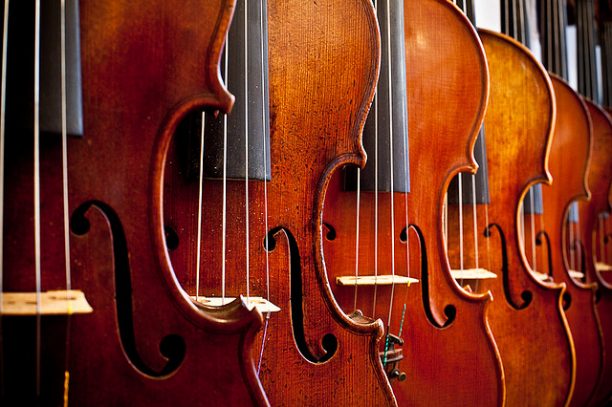 Today we will recommend for you the best strings libraries for kontakt to use in your soundtracks compositions, because nothing moves the heart, tugs the soul, or sets the eyes watering more than a moving string soundtrack!

LASS, to give it its shorter name, is now at version 2.5 and one of the best-regarded libraries for string score composition. The original samples are fairly dry but can be adapted thanks to presets within a Stage & Colour section which are inspired by various movie scores and recordings. Just select a preset and LASS will exhibit the tonal characteristics (including reverb, stage placement and instrument tone) of movie scores including Shawshank Redemption, Cape Fear, and Lord of the Rings. Audiobro Remote Control (ARC) is another great feature and allows you to add experimental changes to instruments and patches, while the Auto Rhythm Tool (ART) offers lots of sync’able rhythmic options. All of these features – and indeed many more – combine to make LASS a truly creative and inspiring string library.

The original Cinematic Strings was recorded in the Verbrugghen Hall of the Sydney Conservatorium and this latest version adds a slick interface, new Legato tool and a Mix Microphone Position feature for extra sonic flexibility. There are lots of other detailed features but not so many that they get in the way of relatively quick composition. Indeed the software prides itself on freeing you from too much parameter tweaking and MIDI CC modifying, so while you’re not getting the size and detail of other collections, you are getting a relatively cheap instrument that should appeal to newcomers and those that need to get ideas down quickly.

FOR EASY PROGRAMMING AND A NATURAL SOUND

Like many of the other string libraries in this round up Cinesamples Cinestrings Core was recorded at a world-famous studio, this time the SONY Pictures Scoring Stage in Los Angeles. It’s fair to say that other libraries have more variations in recorded articulations but Cinestrings Core has one or two other unique features up its sleeve. The Hairpin Creator allows natural crescendo swells without the need to program MIDI CCs while the Cinesamples Adaptive Legato Engine changes legatos according to playing style. While it’s not necessarily a beginner’s tool, Cinestrings Core is one of the easiest packages for experienced composers to make music with.

FOR A MODERN TWIST…

Like other libraries in this round up Novo: Modern Strings offers a traditional take on string recording with violins 1 and 2, viola, cellos and bass samples plus articulations aplenty. However the ‘Modern’ side of Novo offers another section called Evolved which includes a String and Loop Designer. String Designer lets you create patches from raw samples and effects while Loop Designer takes things up another level, offering hundreds of editable loops to trigger your patches. What was already a great string library is really lifted to another level with these additions, and as the whole thing was recorded at the legendary Eastwood Scoring Stage at Warner Bros Studios in LA, you’ll soon be the next Elfman or Zimmer.

KHS says it wanted to release a library with more life in it – one that is punchy and dramatic – and with Concert Strings 3, it has certainly delivered the goods. OK it’s not the prettiest of GUIs but you get 16 players recorded across all five string parts (violins 1 and 2, cello, bass and viola) so 80 players in total, making this one of the fullest-sounding string libraries out there. Apart from sounding big, you also get to control each player’s volume, pan and playing style (tight or loose) for even more added realism. So, yes, lots of controls on screen, but lots to tweak for total flexibility.

If you want something to really get the eyes watering and the heart fluttering then NI’s Emotive Strings could be the string instrument for you. It comprises pre-recorded phrases played at every key and organised within 64 themes with evocative titles like Dancing Snow and Cascading Falls. You simply select single note, melodic or arpeggio phrases, assign them to key switches and get composing. Of all the instrument libraries in this round up, Emotive Strings is probably the most targeted and focussed. Sure it won’t offer the girth of some but you’ll be wringing that hanky out in no time thanks to its quick compositional features.

FOR A WEALTH OF STYLES AND EASY PROGRAMMING

Session Strings Pro 2 is probably the ultimate NI string library, featuring 22 players over two sections and a huge 38GB of content. You get the full force of the ensemble plus options to narrow it down to violin, violo, bass and cello sections, with all the legato, portamento and glissando samples you could ever need not to mention around 25 articulations. There’s a Smart Chord feature and Rhythm and Phrase Animators to keep your compositions accurate and super speedy to produce over a wide variety of contemporary styles, and it’s all very to access, sitting as it does behind a brand new, sleek interface. The only string library you’ll need? Quite possibly.

FOR A BIG BERLIN SOUND…

Orchestral Tools records the majority of its titles at Berlin’s famous Teldex Sound Stage and with meticulous attention to detail so has quickly built up a great orchestral instrument reputation. Berlin Strings features five strings sections (two violin, cello, viola and double bass) with around 30 players and four microphone positions. There is a huge number of articulations including an Adaptive Legato feature that works out a interval transitions based on your playing style and speed. You’ll need 130GB of drive space and a large wallet but you’ll get one of the most detailed and feature-packed string libraries out there.

‘String sounds that are insanely unique and cutting-edge, yet beautiful and creative,’ says Output when describing Analogue Strings, and who are we to disagree because sweet dreams really are made of this. Analogue Strings does lots of conventional plucked and bowed string sounds but you’d be doing it a disservice if you didn’t explore the Motion, Pulse and Dirt options (and many more effects besides) that take these sounds into other realities. Of all of the instrument libraries on offer here Analog Strings is the most suited for creative sound designers, so if you want to go on more adventurous string journeys then look no further…

FOR A DEFINITIVE COLLECTION…

UK-based Spitfire Audio used Air Studios to record this ultimate string library which the company describes as ‘our shot at creating the definitive compendium of Symphonic strings, recorded with a no-holds-barred approach.’ And you can see how that claim stacks up with the stats behind the project. Symphonic Strings features 60 players across violins, violas, cellos and basses and three microphone positions recording 175 articulations (shorts, legatos and longs), trills, tremolos and effects resulting in nearly 90,000 samples. Spitfire Symphonic Strings is one of the costlier libraries but you won’t be left wanting for any string sounds.

What are the best video game soundtracks?

Original Soundtrack composed to our followers