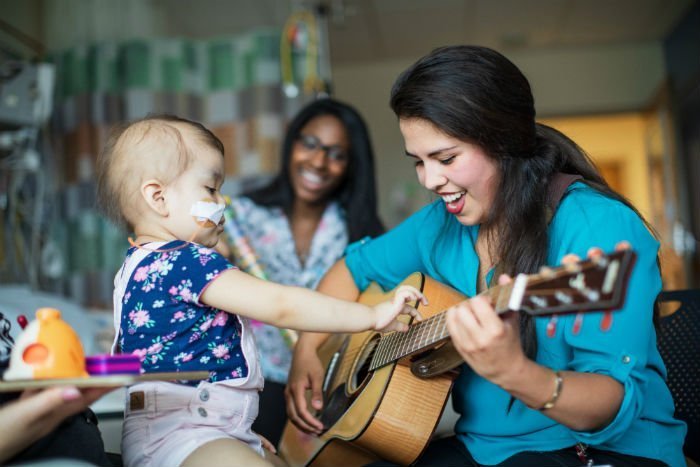 “On this day, I was playing the patient. An intensive, exhaustive seven-hour schedule was presented, full of physical therapy, speech, recreational, occupational and my personal favorite – music therapy.” – CNN, February 2011

Jodi Picoult (Author of the bestselling book Sing You Home):

“Music therapy, to me, is music performance without the ego. It’s not about entertainment as much as its about empathizing. If you can use music to slip past the pain and gather insight into the workings of someone else’s mind, you can begin to fix a problem. “

“When we look at the body of evidence that the arts contribute to our society, it’s absolutely astounding. Music Therapists are breaking down the walls of silence and affliction of autism, Alzheimer’s and Parkinson’s disease.”

Sen. Harry Reid:
“Music helps all types of people to remain forever young.” He noted that Congress had never before “directly addressed the question of music” as preventive medicine and as “a therapeutic tool for those suffering from Alzheimer’s disease and related dementias, strokes and depression.”
– SUPERIOR, WI Telegram, Aug. 14, 1991.

Mickey Hart (Grateful Dead):
“(Rhythm) is there in the cycles of the seasons, in the migrations of the birds and animals, in the fruiting and withering of plants, and in the birth, maturation and death of ourselves,” Hart told a Senate panel studying music therapy.
– REUTERS, Aug. 1, 1991.

Ida Goldman (90-year-old testifying at Senate hearings):
“Before I had surgery, they told me I could never walk again. But when I sat and listened to music, I forgot all about the pain,” said Goldman, who walked with assistance during the hearing.
– REUTERS, Aug. 1, 1991.

Sen. Harry Reid:
“Music therapy is much more complicated than playing records in nursing homes. Therapists are trained in psychology, group interaction, and the special needs of the elderly.”

Dr. Oliver Sacks (“Awakenings”):
Dr. Sacks reports that patients with neurological disorders who cannot talk or move are often able to sing, and sometimes even dance, to music. Its advocates say music therapy also can help ease the trauma of grieving, lessen depression and provide an outlet for people who are otherwise withdrawn.
– ST. Louis Post Dispatch.

Dr. Clive Robbins (Nordoff-Robbins Music Therapy Clinic):
“Almost all children respond to music. Music is an open-sesame, and if you can use it carefully and appropriately, you can reach into that child’s potential for development.” Nordoff-Robbins uses music therapy to help 100 handicapped children learn and to relate and communicate with others.

Barbara Crowe (past president of the National Association for Music Therapy):
“(Music therapy) can make the difference between withdrawal and awareness, between isolation and interaction, between chronic pain and comfort — between demoralization and dignity.”

Oliver Sacks, M.D.:
“I regard music therapy as a tool of great power in many neurological disorders — Parkinson’s and Alzheimer’s — because of its unique capacity to organize or reorganize cerebral function when it has been damaged.”

Mathew Lee (Acting Director, Rusk Institute, New York):
“Music therapy has been an invaluable tool with many of our rehabilitation patients. There is no question that the relationship of music and medicine will blossom because of the advent of previously unavailable techniques that can now show the effects of music.”

Plato:
“I would teach children music, physicas and philosophy; but most importantly music, for the patterns in music and all the arts are the keys to learning.”

A History of Music Players